Christopher Pierce | Artist of the Week

September 26, 2021 / Lily Pad Gallery / Comments Off on Christopher Pierce | Artist of the Week

Christopher Pierce is a nationally recognized fine artist who paints florals, still lifes, portraits, figures, and interiors with panache and a mature sensitivity. Along with his stunning portraiture, he is well known for the huge and commanding florals that come from the bounty of his gardens.

This year his work was featured in the July issue of American Art Collector magazine, and his painting, Early Summer Blossoms won the Kaitlyn V. Moriwaki Memorial award at the Hudson Valley 88th annual juried exhibition. At the same show last year his painting, White Peonies on a Crimson Tapestry won the Kazuko Moriwaki Memorial Floral Award. In 2018 his painting, Prelude to Summer was selected as a finalist in the still life category of the Artists Magazine’s 33rd annual art competition. He was also awarded second prize in the Annual Sylvia Maria Glesmann Members’ Exhibition at the Salmagundi Club, NYC.

In 2014, International Artist Magazine published a feature article on his work, his studio, and a demonstration of his creating one of his paintings in the April/May issue. Also, his painting, Homage to Sargent and Tuke was awarded the “Speaks to You” prize in the American Artist Professional League online portrait and figure exhibition.

In 2013, Pierce was featured in articles in both American Art Collector and Fine Art Connoisseur magazines. His paintings have also been finalists in both the Portrait/Figure and Still Life/Floral categories in The Artists Magazine’s annual art competition, and his work has been published in the Exhibit book for the Richeson75 Online Still Life and Floral Exhibition.

From 2012-2015 he was often artist-in-residence at the Ocean House in Watch Hill, Rhode Island.

In 2011, Artists Magazine featured a six-page article on his work in its June issue. His painting Alex: Homage to Sargent and Tuke was reproduced in the magazine, and also chosen as a finalist in Artists Magazine’s 2010 portrait competition.

In September 2009, Studios magazine featured a 7-page article on Pierce’s studio in Shushan, NY. In 2008, his painting Sunflowers and Peacock Vase won the Helen DeCozen award for a floral at the American Artists Professional League Grand National Exhibition in New York City. In 2006, his portrait The Gardener won First Prize at the Connecticut Society of Portrait Artists annual competition. His landscapes, figures, and floral still lifes have been featured in Adirondack Life magazine and New York Art Review.

The artist, who has been called a poetic realist, grew up near New York City and attended Hackley School in Tarrytown. He received his bachelor’s degree from Skidmore College and his master’s degree from the College of St. Rose. He has also studied with David A. Leffel and Terrence Coyle at the Art Student’s League

Pierce has been elected to the prestigious Salmagundi Club and the National Arts Club in New York City. Other organizations he is a member of include the American Artists Professional League, and the Hudson Valley Art Association. 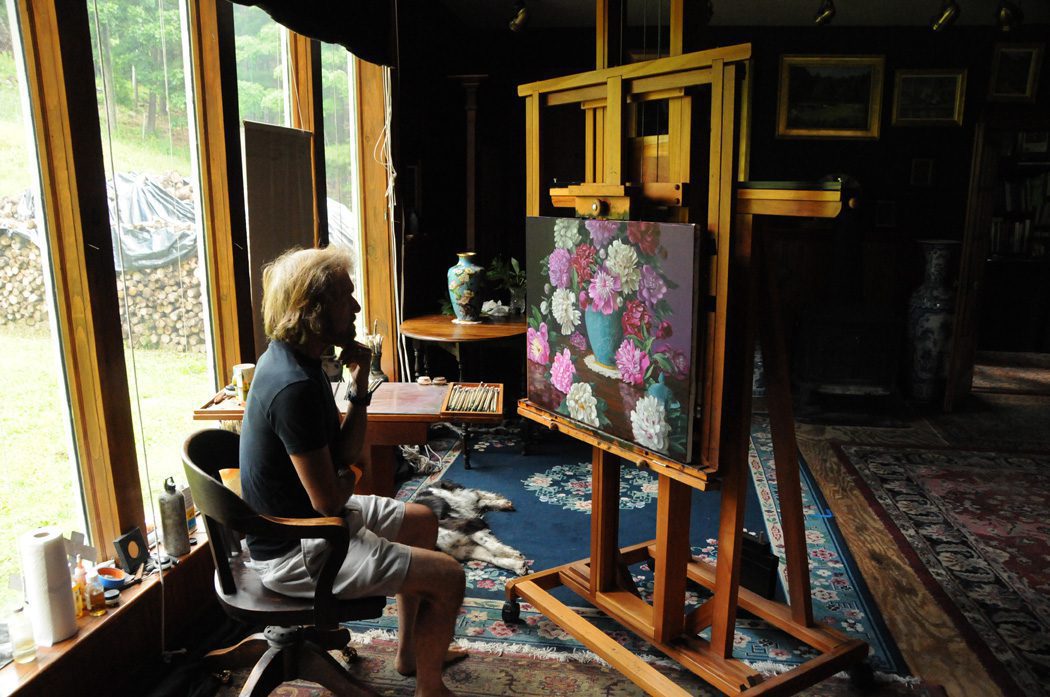 An Interview with Christopher Pierce

I was always an artist since I can remember. Art was not something special in our home. It was what you did. I had an oil painting set by the time I was six years old and went painting with my mother often. I was raised in Westchester County and attended the Hackley School in Tarrytown, NY. There I was allowed to study art as a major subject and received the Sherman prize for art upon graduation. By the time I was a senior, I was painting a minimum of three hours a day. I wanted to become an artist.

But I also wanted to be a pianist and practiced that three hours a day as well…I eventually chose music and was a pianist, and teacher, living in Shushan, NY.

But fate stepped in and I was diagnosed with Meniere’s disease, which is an imbalance of the lymphoma fluid in your inner ear. I would collapse with severe vertigo at random…never knowing when it was going to happen. My hearing started to fail in my right ear, and six specialists told me that I may go deaf. I thought my life was over.

I went to a Vietnamese herbalist who put me on a regimen of strong Chinese herbs, exercise, and a healthy diet. I have not had an attack since.

Pulling myself together after the initial depression, I decided I needed to change my career immediately if there was a chance I could go deaf, and so I went and studied briefly at the Art Student’s League. It was summer and my career as a private piano teacher allowed me to be away during that time. But I needed to support myself and couldn’t stay in New York City. In the fall I had to return up north to teach, trying to think of a way I could give myself the same education similar to that offered by the Art Student’s League.

With the encouragement of a good friend, I organized a three-hour drawing group with a nude model five days a week, and followed, verbatim, ‘a natural way to draw’ by Kimon Nicolaides

I started entering as many local art shows and fairs as possible. Exhibiting at small galleries, libraries, and churches, I showed my work everywhere I could. Everything was my subject.

The best piece of advice I was ever offered about becoming an artist was to: “Do it full time, don’t think you can do it part-time!” So I started teaching piano only four days a week to give me more time at my easel. And then three days a week…then two, and finally I gave up teaching piano because I was selling enough paintings and drawings to support myself.

I was very fortunate, and people began to take notice of my work. A friend helped me build a separate building as a studio. Until then I was using the music room in the house as my workspace. I built up my resume by starting to win awards in local, then eventually national competitions; and articles were written about my work. With this newfound attention, galleries began noticing, and I started being represented by very high-end galleries.

I was actually making a living from my work.

I became a contemporary realist oil painter. Oil was my medium of choice from when I was in high school. My godfather, Leandro Delgado, was mainly an oil painter and I fell in love with the smell, texture, and sight of oils as a child. At one point I ground my own pigments but found I did not have time for that. And factually, the best professional oil paints are better than the ones I was grinding.

Being a painter has to rank among the most versatile of professions. When I’m at home I paint, and when I travel I paint. I paint mostly in my studio, but feel the need to get outside and ‘refresh’ myself; and doing so, find that painting landscapes is a real challenge to me and is a chance to do more problem solving with paint.

And whether I’m painting indoors or out there is no question as to what my favorite subject is: people! Painting for me is such a lonely effort that I welcome any human model to stand or be in front of me…and it’s a challenge for me to put them in landscapes as well as interiors…it’s a whole different set of rules outdoors with such different lighting conditions…painting en plein air actually helps me painting indoors because it gives me new ideas about light…since I paint only from natural light even indoors, I make comparisons and contrasts about how light falls on someone. Even though it’s the same light coming into the studio from a window or skylight, it looks different on the model…is it just the different reflections and surrounding conditions? Or the color of the glass? Or diffused light? Etc…

95% of the work I do is from life. It’s easier!  So much more information there! But, of course, there are situations where it’s necessary to use other media. I had a portrait commission to paint three children 3, 5, and 7 years old. It was very difficult for them to stay still long enough to work with, so with the help of my Nikon D 300, I had them pose for photos. They posed from life also, but the photos were a necessary backup.

Almost all my other paintings are done alla prima in the sense that in a large flower painting I will work on and complete the head of one flower wet in wet, and that flower will be finished. Then the next day I will do another. It’s possible to go back in, ‘oil’ a section of the canvas, and start painting, but I prefer to paint while the canvas is still fresh with the initial paint…the result is more juicy, sensual, and painterly

I used to grind my own pigments, but find that I don’t have enough time anymore. I would rather spend time on the actual painting. I feel now that grinding takes up a lot of time and energy; and factually, ‘store bought’ paints are just as good or better than what I was grinding. But when I was doing it, I wanted to be as ‘pure’ as possible with my materials; and I respect anyone who feels that way. I also feel that grinding one’s own pigments maybe gives the artist a stronger sense of purpose and conviction about what he is doing. Hmmm…maybe I’ll start grinding paints again someday.

I use a Hughes 300 easel and don’t know how I painted without it. Outdoors I use a Julian half French easel. I can pack it in my luggage when I travel abroad. I almost always paint from life and use natural light. I’m inspired by life and paint everything. My subject matter is not limited. I grow as a portrait painter when I paint landscapes and vice versa.

While at the Rockefeller Study Center in Bellagio, Italy on Lake Como, I went out every day with this outfit. It felt as though I had my entire studio with me. I also painted the same way in France. And two years ago, just before Covid, I spent three months in Italy painting every day at Il Palmerino, just outside of Florence. For me, it is a joy to paint where there are people. Some of them are unknowingly put into my paintings.

Living near New York City as a child and teenager was a blessing because of all the cultural opportunities. I remember seeing John Singer Sargent’s painting, “Madame X” at the Metropolitan Museum when I was a child. It left a strong impression on me, and I began looking for his work in other museums and books. He could paint any subject, and his influence has probably had the most profound effect on my work more than any other artist.

As it turned out, I did not lose my hearing, so besides painting every day, I also practice the piano, to the point, actually, of occasionally giving piano recitals. As well as performing here, when I was in Italy two years ago, I gave a recital in a small town in the Apennines. It was an extraordinary experience for me, played on an extraordinary piano, a restored 1911 Bluthner Concert Grand.

I can’t imagine a better way to live. Beauty surrounds me in all my subject matter, and in all the music I hear. 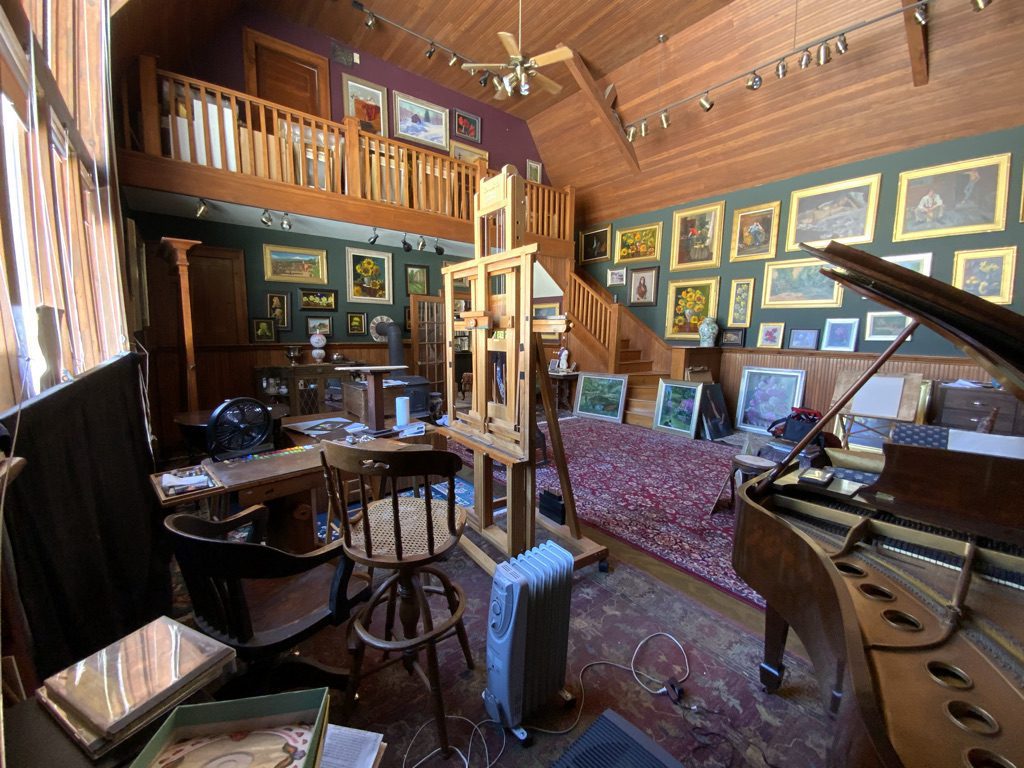 In the Studio with Christopher Pierce

View Christopher Pierce on Artsy
Posted in Artist of the Week, News