Liz Gribin | Artist of the Week

London-born painter, Liz Gribin, has received numerous awards and much recognition for her outstanding artistic talent.  After many years in Great Neck and the Hamptons in New York Liz moved to Boston and now lives minutes from her Gorse Mill studio located in Needham.  She is an internationally acclaimed painter named by the Hamptons Library a “living legend” during the U.S. Library of Congress Bicentennial celebration.

A 1939 emigrant from the war in Europe, Gribin began her art studies in New York’s Museum of Modern Art and the Art Students League.  She earned her degree in Fine Arts from Boston University in 1956 under the tutelage of David Aronson.  Her work is owned and displayed in distinguished collections in the U.S. and abroad. In addition, Liz has donated her original art to raise money for those in need.  While living in the Hamptons, Liz’s painted cigar boxes were auctioned for the benefit of The Retreat– an organization that assists women and children of domestic violence. Several of her large original paintings have been donated to the Residential Care Center for Adults on West 48th Street in New York City, a facility for the homeless.

Besides the numerous awards received over the span of Liz’s career her resume includes spotlights in Arts & Antiques, American Style Magazine, and in 2007 Liz was featured with a full-page spread in the Boston Globe Sunday Magazine.  More recently her work has been showcased in local papers.  Liz’s media broadened in the 1990s to include limited edition prints of original art, etchings, and large books with reproductions of her work.  Her works are represented by several galleries.  Liz’s study of fine art and her lifetime of art have played a significant role in her life as an artist, teacher, gallery curator, member of art associations, and lecturer. 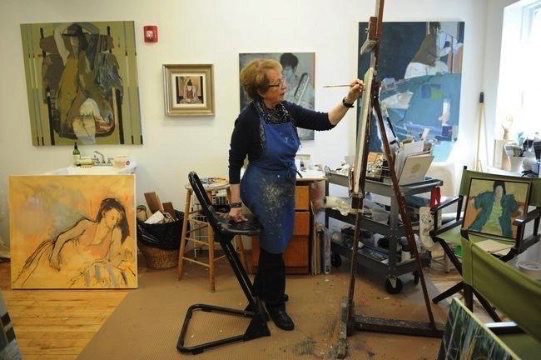 An Interview with Liz Gribin

“Painting has been what I wanted to be doing for as far back as I can remember. As a child I was frequently sick in bed with ear infections; this was before there were antibiotics. My parents subscribed to the Saturday Evening Post magazine, and I would sit in bed and try to reproduce the covers done by Norman Rockwell.”

“Growing up in New York City I had all sorts of opportunities to see and study art. My mother took me to the Metropolitan Museum of Art. The Museum was dimly lit and there were no crowds in the late 1940s, but the paintings hung like jewels, and I was inspired and always came away with my head full of possibilities. My first experience painting directly from the model came when I was a teenager going to the Art Students League on Saturdays. Susie was the first model I painted. She was renowned for her Rubenesque body and bossy manner. I painted her nude, only wearing black stockings. She was unforgettable. I remember being somewhat intimidated by her, but she was a fabulous model.”

“Majoring in painting at Boston University College of Fine Art under the guidance of David Aronson, the model was the focus of most of our work. Although I am not looking to paint portraits, there is an aura that inspires and fascinates me. Not every model has this unexplainable something special that I delight in capturing. Likeness is not important and has nothing to do with the quality of a painting. Each model will have a different impact on my work as do my life experiences.”

“The model that had perhaps the most impact of all was my son David when he lay in a month-long coma. A talented equestrian, he had a freak accident in his college days. He was without his riding helmet when his horse spooked, fell, and David’s head hit the ground hard. On that morning, in an instant, our lives changed. Coping with his long and tedious therapies which would, for almost a decade, bring him back to a normal life, was probably our most difficult challenge. For me, it meant more than a year of not painting. Then I decided that there was a way that painting could be the best therapy for David and me. He sat for me as he listened to audiobooks, and we both slowly found our way back. The paintings of that period of time reflect his recovery as well as my own. The earliest ones are vague and abstract and as time went on the work became brighter and full of hope. Abstract Elements was painted during this period.”

“Paul Wood was a most influential artist and teacher to me. He taught in his studio in Port Washington, NY. His works whether it was painting, mosaic or stained glass had a sense of freedom that I learned to embrace. Paul Wood helped me free myself from a very tight, academic background and inspired me to think differently about concept, composition, and color. The painting entitled Room Full of Light was one of the first paintings I did under his tutelage and was the first painting I entered into an art show.”

“When my husband Nat and I moved to Bridgehampton, out on Long Island’s South Fork in 1994, it was a move that brought light and the landscape into my work. During the 14 years we lived there I was fortunate to have many good models. Outstanding for her many talents as a choreographer, dancer, and actress, Kate Mueth brought to her modeling for me an inspiration that I had not encountered before. She is the one model that is in many of my paintings, etchings, and limited-edition prints.”

“Through all the years I’ve been an artist I can say that there are some days that things come easier than other days. I used to have a cartoon from the New Yorker magazine on my studio wall. It depicted a man sitting on a stool with empty canvases all around him as well as one on the easel. He looks at his friend and says, “Some days it’s magic and some days it’s not.” I think of the magic as “being in that certain zone.” Years ago a New York Times critic, Grace Glueck, spoke at Guild Hall in East Hampton and discussed this very subject. She said, “It’s when the hand has a brain.”

View Liz Gribin on Artsy
Posted in Artist of the Week, News